It has been WAY too long since my last post, my sincerest apologies. I was consumed with a handful of projects, some of which are submitted, and some of which I presented at the Society of Vertebrate Paleontology meeting in Pittsbugh, PA this past October 10-13.

I fully intend to blog on some of this new material soon, but want to start with a couple of things. 1) A report on a symposium held at the recent Society of Vertebrate Paleontology meeting, and 2) a new series of blog posts reviewing recent literature and its relevance to the study of aquatic amniote evolution studies. I’ll get to the latter in my next post, but let me get started with this report on the recent (October 11, 2010) SVP Symposium titled, “Physical Drivers in Marine Tetrapod Evolution”. I’m keeping this brief, not only to save you from my usual boring wordiness, but also to protect the rights of authors of these presentations from having their unpublished material shared without their permission.

The symposium was organized by Neil Kelley (UC Davis) and R. Ewan Fordyce (University of Otago). Neil is a promising graduate student studying Triassic marine reptiles, and Ewan is one of the world’s leading experts on fossil cetaceans, and together it was a good match that brought lots of good minds together. 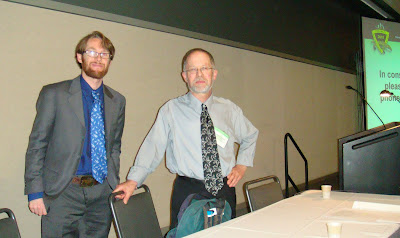 Among the minds brought together were (presented listed here only, though obviously many had co-authors that significantly contributed):

Topics covered included a variety of methods, details, and scales, though some common themes were:


In the end, the topics covered all had one common theme – that the evolution of aquatic amniotes is very closely linked with the evolution of the Earth. Despite what one might see as an interesting lesson in history, I think that many of these talks demonstrated that for many of the taxa still living today, we can only hope that these lessons learned will help us avoid reliving history, especially those parts that ended in extinction. These are the sorts of studies that make paleontology relevant to modern ecologists and conservationists in the face of global warming.

I think that the symposium was a massive success, particularly because it seems to have encompassed a huge diversity of methods, taxa, and times, and brought people together to share ideas and potentially collaborate. I know I’m already going down the road of starting some new projects with people I spoke with just after the symposium. That is, after all, the more proximate goal of these symposia, and I am glad to have been part of it. I would like to thank Neil and Ewan for inviting me, and thank you for sharing my interest in keeping current with what is going on among aquatic amniotes.

Until next time... which will be soon!

Posted by Brian Lee Beatty at 7:50 AM