Hi folks, I'm glad to be back after something of a hiatus. I had some important personal reasons to be away, but now am back in business and have several posts ready to go for the next several weeks, with many more in the works so I can keep this going regularly. This has become a healthy outlet for my need to share ideas and stimulate my own internal discussions that make my work better (I hope), and it would not be worthwhile if it were not for you readers, so thank you for your time and comments. I read them all, and treasure the time you spend even contemplating my crazy ideas.

To start, I feel it is appropriate to do a brief report about a paper of mine that came out this past summer, coauthored with Andrew Heckert (Appalachia State University, NC) in Historical Biology titled, "A large archosauriform tooth with multiple supernumerary carinae from the Upper Triassic of New Mexico (USA), with comments on carina development and anomalies in the Archosauria"
Whew! Long title, I know, but it was intended to be descriptive.

To summarize, Andy had an unusual tooth and knew I have been focusing some of my energies on paleopathology, especially those of teeth, and suggested that we work together on describing this specimen he collected some years ago from the Triassic of New Mexico. 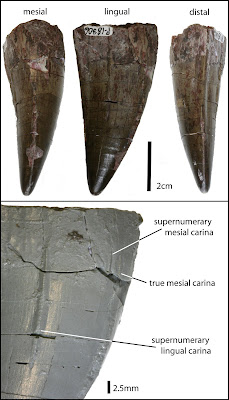 If you are familiar with archosauriform dentitions like this one, it is ziphodont (mediolaterally appressed, with carinae along the mesial and distal edges) and resembles the tooth of a large number of taxa. The age, locality, and size of the tooth suggests it belongs to a semiaquatic, crocodile-like reptile known as a phytosaur, although it could be from a large rauisuchian or other similar animal.
What matters more is that in addition to the normal carinae on the mesial and distal edges, there are two extra carinae, running parallel to the long axis of the tooth, but found on the lingual surface of the tooth (the tongue-side). Split carinae have been noted in theropods for some time, including tyrannosaurids (Currie et al 1992, Erickson 1995), carcharodontosaurids (Candeiro & Tanke, 2008), and even a split carina was noted in a phytosaur previously (Hungerbuhler 2000). This was the first time anyone had recognized something that was not a split carina, but a duplication of one, including one so far lingually displaced.
This is odd, considering that unlike the tooth deformities found in some sharks that can result from traumas when feeding (Becker et al 2000), carinae are structures of the tooth that are formed during development within the jaw as the tooth forms, and are only surface features. There is no plausible way to consider alterations or duplications of carinae in these teeth as anything but developmental anomalies, for this reason.
But dental variation is quite common in many animals, so it should be such a surprise, should it? This is where it gets interesting... Most dental variation studies are focused on mammals, where tooth development is very well understood, and that understanding centers around the fact that much of the variation is a result of small regional differences in the thickness of enamel in different areas of the tooth. The gene expression aspects of this are now well understood for mammals in general (references abound on this: 1, 2, 3, 4), but less is known about archosauriform tooth development.
Considering that the external morphology of interest is ultimately the surface of the enamel, knowledge about which tissue influences tooth morphology most can be derived from looking at the end product of tooth development, the adult tooth itself. It is rather difficult to observe the stages of development of a fossil organism, but if one can derive development from an adult form, then that's a start. So, if one looks at enamel thickness, one might get at how tooth morphology in this and other archosaurimorphs works.
Thankfully, P. Martin Sander (a hero of mine for all the creative ways he has tried to tackle paleobiological conundrums) has done a significant amount of work in describing the enamel microstructure of a large number of fossil non-mammalian amniotes, including rauisuchians, phytosaurs, and many others (Sander, 1999). It turns out that like our specimen, many non-mammalian amniotes maintain a mostly uniformly thin enamel, including the enamel covering the carinae and their denticles (this is not always the case for the denticles, but is fairly common). This would in turn suggest that their crown morphology is the result of the control of the morphology of the underlying dentine, not the enamel.
This has huge potential implications for the limitations that non-mammalian amniotes have in developing complex crown morphologies like those seen in mammals, and may explain why only a few rare crocs here or there (Simosuchus, etc) have anything but cone-like dentitions. Ornithischian dinosaurs are a whole other group that seem to overcome this hurdle, though at present I don't think anyone is considering the question of how their teeth developed, or even how they are structured in much of a histological sense. If anyone is up for tackling this issue, I am certainly game :-]
All in all, this one tooth led to some tantalizing, if speculative, thoughts on how archosauriform teeth develop, and how that is limited. The paper goes much further into the evo-devo of tooth development and what we know of it in amniotes in general, as well as some coverage of the curisou fact that the serration density of the extra carinae are uniform and identical to that of the normal carinae, suggesting that even with the new carinae, serration density seems to be stable and conserved, perhaps supporting its utility as a phylogenetic character and suggesting a developmental independence between the location of carinae and the morphology of the denticles they have.
I hope you find it as stimulating as I did.

If you want more discussion about this, see coverage on the blog, Chinleana.

Next up:
Sirenian tooth development
Posted by Brian Lee Beatty at 11:39 PM 4 comments: