Last summer (2008) I went to Victoria, British Columbia, to work on a new specimen (collected on my birthday in the summer of 2007) of a desmostylian that came from a locality similar to the type locality of Cornwallius sookensis. Joan Kerik, the Collection Manager (an extraordinary one at that) at the Royal British Columbia Museum in Victoria had contacted me a couple of year before regarding Cornwallius, which was something I was working on at the time (just now published in JVP). Eventually when this new material came up which we all expected would be Cornwallius, she connected me with Thomas Cockburn, a Research Associate that specializes in the Sooke Formation invertebrate fauna.
Tom took me to the locality, as well as the type locality of Cornwallius sookensis, Muir Creek. We had an extraordinary time, saw deer eating algae on the rocky intertidal and a bear eating something dead in the intertidal as well. At the new locality we came across only a little new specimen, this time a caudal vertebrae of a cetacean (remember this is Late Oligocene, so it could be from any number of weird cetaceans of the time). But no more desmostylian. Still, I happily had spent the prior two days studying this partial skeleton already in the museum, which includes half a skull and its teeth (except the incisors), a partial scapula, most of a humerus, and most of the vertebrae and ribs. The skull was quite interesting, because it looked very much like the skull of Cornwallius, yet the teeth looked like a smaller version of Behemotops. Behemotops is not known from much of its skull other than the posterior portion (B. katsuiei from Japan - Inuzuka 2001), and the new specimen does is throw much of that out, revising the relationships of the two main clades of Desmostylia and suggesting that Behemotops is more like Cornwallius and Desmostylus than previously asserted.
So, Tom and I are currently working on the manuscript and I asked my friend, Carl Buell if he could draw this new animal so we could submit it as a possible cover for JVP. He is still not finished with the final illustration with a background and all, but I thought it would be nice to share the final draft of what we came up with of what the animal should look like (with a neutral background). Carl said I could post this, but if you have any questions about its use, I would contact him. While you are at it, you should check out his Flick'r page. The only thing that trumps the quality of Carl's illustrations is how wonderful and generous a friend he is.
I hope you enjoy this - for more you'll just have to wait for the paper to come out (here's where I shouldn't, but will, suggest that you urge JVP editors to move fast - I'm just kidding!!!). 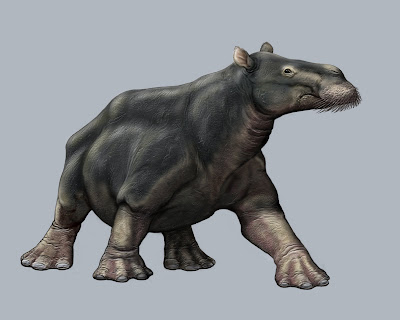